"Write what you need to read." ~Brene Brown

How We Respond to Others (and versa vicey)

Is a reflection of how we are in our own hearts.

I've been haunted lately by a story I heard once as we sat around the fire telling stories. It's one of those stories that have been told around campfires for hundreds and thousands of years. So what that tells me is that the subject is not unique to our modern times and our modern problems.  It's a story for EVERY one of us. 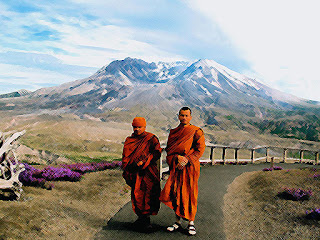 Once, long ago (but really it could have been last week), two monks walked a long and dusty road to the next village on their pilgrimage. They passed the time trading stories and reflecting on the message and merit of each of the stories they told.  One was young and full of ideas and energy. The other was older, and was full of odd stories and mostly questions.

At a certain point, as they deliberated on the nature of good and evil, and whether people could be divided into categories of good and evil, or whether each human being was a mixture of both, they heard the sound of hoofbeats approaching at a rapid pace. As the hoofbeats grew closer and closer, they could feel the ground begin to shake. Then they heard the sound of a whip cracking and a  man Yelling, “Hyaah!”

The horse and cart approached so quickly that the monks were very nearly knocked off their feet!

As they dusted themselves, the young monk muttered to himself.and shook his fist at the rude person who was now not much more than a cloud of dust. The other monk raised his hand in the direction of the horse and cart now thundering off down the road. “Peace be with you, and may you know happiness and joy wherever you may be headed.”

“How can you say that?” cried the young monk, “He nearly trampled us to death!! He's evil, and should be brought to justice!!"

The older monk, still in a trance of loving best wishes, said, "If that man felt peace, and knew joy and love in his heart, he would not have treated us in such a manner."

The young monk walked along in silence for quite some time before he spoke again.

Your thoughtful insights are a valuable part of the conversation. Thank you for contributing!