"Write what you need to read." ~Brene Brown

The more technology advances, the more we can advance. Unfortunately, the same technology that leads us toward positive gains can be used for more nefarious purposes.  Here's an example I read recently as I was driving along:

Car accidents are one thing.  We can do other dark deeds as we click, share, text, and snap. We may feel virtuous, but we as humanoids have blind spots.  We all want to be good people, but sometimes our best intentions can be deadly. Nobel prize winning author of the Gulag Archipelago and survivor of said Soviet Socialist gulags Aleksandr Solzhenitsyn wrote,
“If only it were all so simple! If only there were evil people somewhere insidiously committing evil deeds, and it were necessary only to separate them from the rest of us and destroy them. But the line dividing good and evil cuts through the heart of every human being. And who is willing to destroy a piece of his own heart?”

Another metaphor for this concept comes from the Cherokee story of the old man who told his grandson that two wolves live inside each of us: one that is evil. It is filled with anger, jealousy, revenge, hatefulness, prejudice, false pride, guilt, arrogance, and malice. The other is good. It is filled with love, joy, kindness, compassion, serenity, and generosity. The old man told his grandson that these two wolves battle with one another. The grandson thought about it and asked, “which wolf wins?” The old man replied, “the one we feed.”

In his first inaugural address, President Lincoln spoke to the impending civil war. His final words were, “I am loath to close. We are not enemies, but friends. We must not be enemies. Though passion may have strained it must not break our bonds of affection. The mystic chords of memory, stretching from every battlefield and patriot grave to every living heart and hearthstone all over this broad land, will yet swell the chorus of the Union, when again touched, as surely they will be, by the better angels of our nature.”

Steven Pinker chose that beautiful last phrase as the title for a whole book on the subject. In his book, he spoke to our human drive to violence, and that we must be mindul of our innate capacity for violence.  In his book, he described five inner demons that Motivate us toward violence. They are as follows:
Since I mentioned all that is holy, let us turn then, to the Countering the four Better Angels of our nature that move us away from violence. They are:


At this point, you may be thinking, “But wait a minute Liz, aren’t some of those better angels seeming very similar to that fifth demon? That's what makes this whole thing so complicated, and it's why I would redirect you once again to that quote from Solzhenitsyn.

This is where life gets messy, and why our current newsfeeds are awash with items that trigger our emotions, and which beg us to click “Like” “Love” or “share.”

It's what gets the tables flipped at Thanksgiving dinners, and what caused all sorts of people to cull their friends lists on the morning of November 9, 2016.  Or thereabout.

People have joked that there is no HATE option. That’s part of the psychology. You feel virtuous in your small click of the mouse because it’s a positive action. It’s funny. You love it. It makes you think, “Wow.” Or you want to share that the whole darn subject has you steaming between your ear bones, and rightly so.

We don't wish to have our mind palaces disrupted.

How many times do we share something impulsively because it fills us with revulsion? We become outraged and want everyone to know that such and such a thing has happened. We add lines to emphasize how despicable it is, or what we wouldn’t want to do to that person if we could catch up with them.

And then a few days or weeks later, we come to the realization that there was more to the story. We may be quite loathe to acknowledge it because of our confirmation bias, but there it is.  It all happened with a tiny, innocent click of the mouse, or tap on your phone.

Let's get back to professor Fogg again for a moment.  He has a formula to explain human behavior. It may be grossly simple, but it's worth taking a look.  Here is the formula.

Here is how to understand the formula: 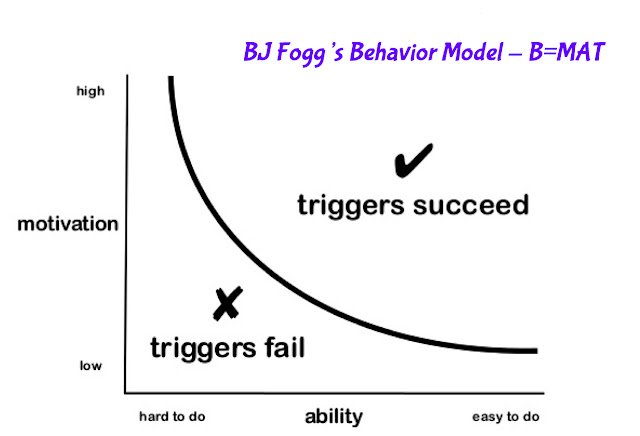 Your Behavior can be a result of your motivation, your ability, and a trigger.
Trigger warning: A trigger is something that stimulates us to consider an action. Here's how it works. If you are triggered to do 20 pushups because you read it's good for your health, you may have high motivation. If, however, you are overweight and out of shape as I am currently, your ability is low. Even if your motivation is high, your low ability will keep you from the behavior that would lead to being able to do 20 pushups. You WILL fail. If, however,  You need to find an intermediary activity you can do that would lead you, with improvement over time, to those pushups, you will carry out the behavior and you will, in time, succeed. Yay, you.

How does this apply to social media?  It's so easy to click a button or tap your phone screen. If you're highly inflamed, inspired, etc., they got you. Click bait. That's how posts go viral. The more you can't wait to share it, the more you'll give in to the impulse.

The reason why it's good to come out of your bubble and have a look around is that if you don't, you run the risk of developing a blind spot. Your group may suffer from Groupthink.  You might share something that is hurtful, wrong, or that might incite violence. I just watched a video today where person A punched person B over an idea. Suddenly a nice person has become hateful. While I describe a physical manifestation, raise your hand if you've ever gotten into a heated exchange over the inter webs?  It can be addicting, and it can bring out things in us that we'd best leave as just inside-our-own-mind ideas.

What happens when people begin to fear that if they have a thought which does not align with the narrative of the group, they may be shunned or punched?  They fall silent.  Or they attack the group to find another one.

Ultimately there is a reason why we have thrived through the healthy debates between people with differing ideas. Our ideas can only be strong if they can hold up to opposing arguments. When we talk to someone who questions us, our ideas get smarter. If we aren't willing to do this, we may develop some bad ideas and not know it because if nobody is going to disagree with you, you may think you're brilliant.  Imagine what a nice world it would be if we could discuss something, admit disagreements, find agreements, and share a nice sandwich and a lemonade?

Here's what John Stuart Mill wrote, and is something to consider embracing (please insert whatever pronouns work for thou. He was a cisgender white male of privilege who lived before such ideas were constructificated):


“He who knows only his own side of the case knows little of that. His reasons may be good, and no one may have been able to refute them. But if he is equally unable to refute the reasons on the opposite side, if he does not so much as know what they are, he has no ground for preferring either opinion... Nor is it enough that he should hear the opinions of adversaries from his own teachers, presented as they state them, and accompanied by what they offer as refutations. He must be able to hear them from persons who actually believe them...he must know them in their most plausible and persuasive form.”

How do we decide what to share or not to share? I’ll leave you with a beautiful and succinct, easily memorizable quote:

(And how many of you will remember it because I said, "The So Crates Dude instead of just Socrates?)

Okay, well that about wraps 'er up.  Be kind, check for truthfulness, and know that you can't even always count on Snopes because confirmation bias abounds everywhere. Stick to cute puppies and kitties, rainbows and unicorns, and memes that uplift.

Think before you interact on social media, and practice Schadenfreude avoidance. People will think you're smart.

Also, please like or share if you found this to be interesting or of use, and then feel free to laugh uproariously at the irony of it all…   And if you're not motivated by these ideas, here's a cute puppy.
The better angels in me see the better angels in you. Thank you for reading.

Your thoughtful insights are a valuable part of the conversation. Thank you for contributing!